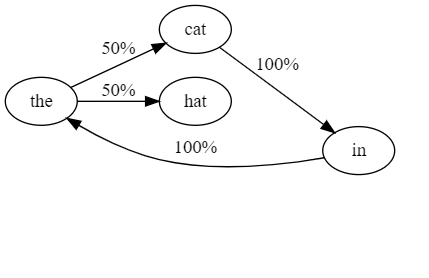 In this activity, we will use Natural Language Processing to read job descriptions and determine which ones are for legitimate job opportunities using Python and Google Colab.

Jun 12, 2022 | By Adam Zucker and William M. Mongan
View or import from this git repository: https://github.com/azucker99/NLPDemo

One field of computing studies the application of Machine Learning to process the written word. That could include text like the words on this webpage, or in a book, or generated on social networks. This is a field called Natural Language Processing, or NLP. For example, you might have read someone’s social media page, or comment on a web article, and wondered if it was real, or if it was generated automatically by a "bot". Today, we will use NLP to help determine if job descriptions are legitimate (that is, do they actually represent real job opportunities).

Most machine learning algorithms begin by training from existing data: that is, by reading existing text that we already know is legitimate (or not), and telling the algorithm which category it is. Over time, the algorithm will formulate a model that will help it infer in general whether text falls into one category or the other by identifying patterns in the training data. Hopefully, this will allow us to run the algorithm on unknown data (like a new piece of text) and decide which category it most likely falls into. One way we can see how effective our model is at doing this is to use other examples for which we already know the answer: instead of training on it, we ask the algorithm to predict with it, and we check its work. If it does a good job accurately classifying these, we can infer that it will do a good job in general.

We will use the Python programming language in an environment called Google Colab, which is a free tool to run interactive code in small steps.

To get started, log into Google Colab. Google Colab uses something called a notebook to write and experiment with code. This way, we can write our code in small steps, and try each one as we go. This is often easier than trying to write an entire program from scratch and running it all at once.

Go to the File menu and select Open Notebook. You’ll see a tab called GitHub at the top. GitHub is a platform for sharing code, and we’ll be using Adam Zucker’s GitHub repository to get started. Enter his repository URL: https://github.com/azucker99/NLPDemo.git into the open menu window.

You might see a few repository choices: if you do, select the one called azucker99/NLPDemo. That’s the one that contains the notebook and the sample job description files that we’re going to train our natural language processing algorithm with.
If it asks you to select a branch, select the one called main. It’s probably the only choice you’ll see! Finally, you’ll see an available file to open called nlp_demo.ipynb: this is the notebook! Go aheand and select it to open the notebook.

First, we’ll download the example job description files. After doing this, you can click on the folder icon on the left side of the Colab window, and you’ll see the files inside. You can click on them to read them if you like. To download them, click the "play" button next to the first code snippet:

Next, click the play button next to the snippet that says !pip install -r requirements.txt. This will install the spaCy library and the other library functions from the Internet that will help us to build our model. It will look like this, and when it is done, there might be a button to Restart at the bottom (go ahead and click on it if you see this).

Similarly, click the next play button to tell our Python program that we’re going to use the libraries we just installed:

Reading the Training Data into an NLP Model

Now we’re ready to create and train the model! We’ll read job description data from a website called Kaggle, which is a data science website that features tutorials, examples, and challenges that you can try. With a Python notebook, that’s as easy as hitting the play button again, which will look like the below!

Looking at the Data

It might seem like it, but Data Scientists don’t just hit the play button to generate their models. They could, but how would they know if it’s really building the right model to make predictions later? Fortunately, there are many techniques that we can apply to make sure we’re generating models correctly. Let’s explore a few: you can click the play button next to each one to see what it does.

First, we can see that our dataset has 17880 rows (job descriptions), and 18 columns. What kind of columns do you see for each job description? Which one contains the actual job description text that we’ll be reading?

Exploring the Dataset as a Whole

Often, it is helpful to explore the data in its entirety rather than one row at a time. Let’s see how many fraudulent job postings there are in the example set. 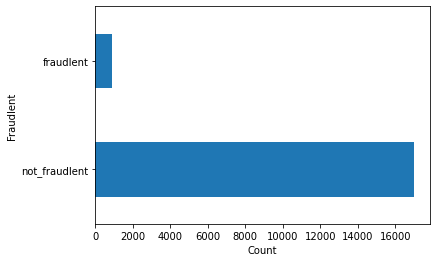 What do you notice about the number of fraudulent entries in the dataset? Do you think our algorithm will do better at classifying job posts that are fraudulent or non-fraudulent? Often, it is better to have about the same number of training examples for each category (called a class) that we want to train on. What do you think we can do about that to help even things up?

We’ll use the spaCy library to read this dataset and look at the fraudulent/non-fraudulent column to find patterns among the job posting training data. For example, it might find that jobs with very short or very long descriptions tend to be fraudulent (what would happen to legitimate jobs that happen to have long or short descriptions, if this were to occur?). It might find that jobs with certain words in them tend to be fake. Unfortunately, it might find that jobs from certain zip codes tend to be fake, even though that’s not really the case, because it just happens to see those patterns in the training data. What can we do to ensure that algorithms don’t train on potentially discriminatory inputs?

For now, go ahead and run the training commands:

You might notice that the job descriptions have "bad data" in them - funny looking characters and typos, missing entries, and misspelled words. You might have even noticed that the word "fraudulent" was misspelled in the data and subsequent bar chart above! Data Scientists often write programs to correct or remove these from the data prior to training. We won’t do that today, for the sake of time, but what other things might we take out of the data? For example, what kinds of words would occur in both fake and legitimate job descriptions (words that everyone uses everyday)? Should we remove those, too? These are called stop words, and we tend to remove them from the model (words like "and" or "the").

At the very beginning, do you remember that we said it’s a good idea to save a few rows from the dataset, so that we have some to test out the model with while still knowing the answers? We’ll do that right now. Let’s give 80 percent of the data to the model for training, and save the other 20 percent for testing (so it won’t know the answers to those, even though we do for checking!).

Allowing the Algorithm to Generate the Model

Now, we’re ready to generate the model itself. This involves reading all the training documents, so it takes a little while. Come back in 5 to 10 minutes and it should be ready to continue. You can hit the "stop" button (which is where the play button usually is on the left while the code is running) to quit this process at any time - you can move on with the training model it has generated so far if you don’t want to wait for it to finish.

Finally, let’s test the model on our remaining 20 percent that we saved earlier! You’ll see several scores. See if you can find the section labeled Textcat F: this shows a few columns called P (for precision) and R (for recall), out of 100 percent. Precision tells us how often the model correctly predicted that a job post was fraudulent when it really was fraudulent (or that it was not fraudulent when it really was not). Recall tells us how often the model didn’t give us a "false positive", and incorrectly guess the answer. Unlike a math test, when you get back your grade out of 100, we like to evaluate classification models in both directions. For example, you could say that you can perfectly predict when it is going to rain by saying it’s going to rain every day - you’d never be wrong! Recall allows us to measure how often you guessed it was going to rain on days that it was sunny out. These scores are kind of merged together into a single score called the Receiver Operating Characteristic (ROC), which is a score from 0 to 1 (with 1 being perfect).

How did they do? For us, the model didn’t do so well. There are some things we can do to improve our results. Can you think of some reasons why this might be, and what some of these things are?